5 Best Flashlight Apps for Android That Are Safe 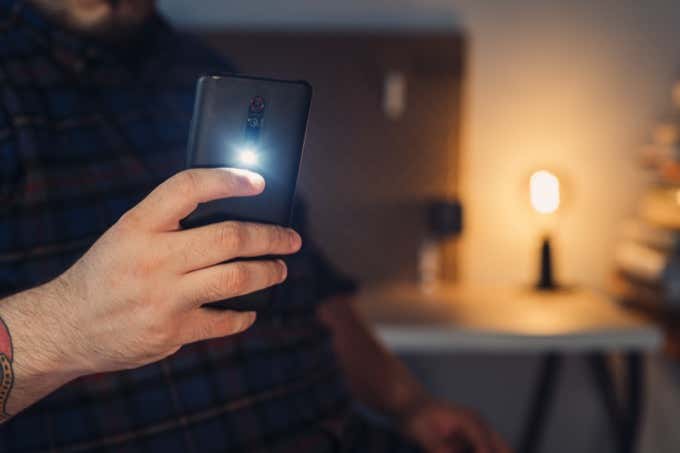 The camera flash on your Android smartphone is also useful as a flashlight that you almost always have with you. However, in order to turn it on continuously, you need to use a flashlight app that tells the flash to stay on.

While almost all Android phones now have a built-in software toggle to do this, there are still a few third-party flashlight apps out there. We’ve rounded up some of the best flashlight apps that don’t ask for more permissions than they should.

Why Would Anyone Want a Flashlight App Today?

As mentioned, your phone probably already has a software flashlight toggle. Phone makers quickly realized that this was a useful feature to include, so they’ve put it there right out of the box. So why would anyone want to download yet another app to achieve the same goal?

It’s true that most people probably wouldn’t find a dedicated app useful, but some flashlight apps do offer additional features. For example, some may offer strobe flashing modes or let you tweak the brightness of the light. So in some cases there are legitimate reasons to want one!

The big problem is that small and numerous apps such as flashlight apps can often simply be a front for what is essentially spyware or malware. For example, you may download a flashlight app that works just fine, but then asks for permission to manage your calls or look through your contacts. Clearly there’s no actual reason for a flashlight app to want those powers, so it’s best to avoid them.

For the apps we’ve chosen here, there are generally two types of permissions that are acceptable. First of all, the app needs permission to access the camera. Secondly, ad-supported applications may ask for internet access.

In both cases we do urge you to choose the Only allow while in use option offered by recent versions of Android. This way you know the app isn’t using its camera permissions to record you in the background!

Other permissions are also acceptable if they are needed for any special features of a given application.

The concept behind this app is very simple. All you have to do to turn on the flashlight is shake your phone. This may not sound like something important, but even with quick menu access from a locked phone it can take a while to find the software toggle.

With this application, all you have to do is shake the phone once or twice and the light will turn on. Very handy if the lights go out and you just want to quickly have a flashlight.

We had to turn the shake sensitivity up a little because it took too much shaking for it to activate, but once it was dialed in for our handset it worked very well. Just be careful not to crank it up too much, or your poor flashlight will be holding a rave in your pocket as you walk down the street!

The only permission we were asked for was camera access, and the advertising is unobtrusive. So this is an easy app to recommend.

This is a flashlight app that’s been around for a long time and has almost half a million downloads, so you know they must be doing something right.

Its main trick is that it’s not just about using your camera’s LED flash to make light. You can also take control of your phone’s screen and force it into maximum brightness with the app.

You also have fine-grained control over the color and intensity of the screen. Color Flashlight also offers a few fun features, such as a flashing strobe screen or a video clip of a candle burning.

It only needs camera and internet permissions and can be quite versatile when you need specific lighting conditions. For example, you can set it to a warm color with low intensity for reading.

Icon Torch is as its name describes. When you tap the flashlight app icon, nothing opens. Only one thing happens: the LED flash comes on. That’s it.

This is simple but brilliant, since it means you can put the app icon wherever it’s easiest to reach, such as on your phone’s dock. This is usually much faster than swiping the quick access shade down and looking for the flashlight button.

This app asks for no permissions, has no ads (or interface for that matter) and is completely free. There’s a paid version of the app for $1.49 which is the same, but gives the developer Aleksandr Balaev a tip. At the time of writing only a few people had done so, including us. So if you like this smart and unobtrusive application, why not show some appreciation?

The main value proposition of the massively popular Tiny Flashlight by Nikolay Ananiev used to be its small install size. However these days phones have so much onboard storage that no one really cares. Yet more than four million people have downloaded this app. Why? There are two cool aspects to this flashlight app.

First of all, it’s modular. You can download plugins that add functions you want without cluttering the application with ones you don’t. Secondly, it addresses one of the biggest issues with flashlight applications. That is, the fact that they’re utter battery hogs.

While we have to take Nikolay’s word for it, Tiny Flashlight has been written to cut down on the total power consumption somewhat. Which could be a literal lifesaver in emergency situations.

Flashlight Free (Free With No Ads)

The last app on this list is perhaps the most perfect embodiment of a flashlight app that doesn’t ask for more permissions than it should. Flashlight free is a basic, transparent and simple app to use. The developers wanted to address the privacy concerns flashlight apps have caused in the past.

They take care to explain exactly what every feature does, what has changed exactly in each update and anything else users should know. There’s nothing more to say, it’s great.

Now We See the Light!

These excellent flashlight apps make it clear that there’s still plenty of room for innovation when it comes to this genre of software. Phone manufacturers can still make it faster and more convenient for us to activate the built-in flashlight feature. Mostly however, these are just a great set of flashlight apps to light up your life a little.