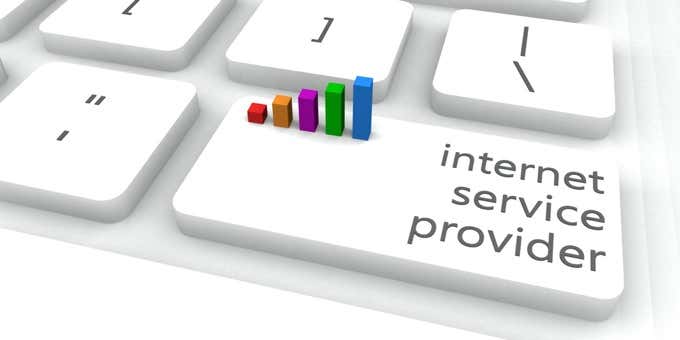 There are a lot of companies offering internet deals these days, so it’s very tempting to move over to someone advertising a (seemingly) better deal. However, how can you tell which internet service provider (ISP) is really offering the better choice?

Let’s look at the most important things to keep in mind when you compare new internet providers.

ISPs want to make their deals look as attractive as possible. So, of course, they’ll put the best parts of the deal front and center and hide the less appealing aspects in the fine print. It’s very important to carefully read the terms and conditions to know whether there are any pitfalls.

Many seemingly good deals are also part of a fixed-term contract. So you’re getting a better price by locking yourself in for a year or two. If you choose to cancel, you’ll have to pay a steep cancellation fee and settle any hardware offered as part of the deal.

For example, if you’re moving from DSL (digital subscriber line) internet to fiber, your current DSL router can still work through it’s WAN (Wide Area Network) ethernet port, but someone needs to install the fiber endpoint in your home if it isn’t already there. If such an installation is needed, be sure you know who is responsible for paying the fee and how much it would be.

Similarly, fixed wireless internet services such as home 5G are becoming popular in parts of the world, but this usually means both buying a special cellular modem and router device and potentially the installation of an antenna on your roof or outside a window.

Often ISPs will offer “free” installations as well as hardware. However, this is commonly tied into a long-term contract. So think carefully whether you want to save money in the short term and then endure locked-in payments. The hardware offered by ISPs as part of these deals are generally not very good either. You’d be better off buying a higher quality device yourself in most cases, but do check out reviews of the hardware on offer by the ISP to be sure.

Many internet providers, even those offering fiber internet, are selling “asymmetrical” internet services. What this means is that the download speed is different from the upload speed. It has been the case for many years that most internet users need fast download speeds and have little use for a wide upstream pipe.

However, times have changed drastically. We now use massive cloud storage services, we make heavy use of video chat and many people stream live video over services like YouTube or Twitch.

That’s just the tip of the iceberg, there are plenty of common applications that benefit from fast upload speeds. So consider looking for a “symmetrical” service where the upload speed matches the download speed. It will be a bit more expensive comparatively, but so many modern applications benefit from it that it’s well worth the tradeoff.

While ISPs may advertise a certain speed with their services, there’s often a catch hidden away in the terms of service. ISPs have something called a “fair use policy”  that sets out what they see as abuse of your connection. When they think the way you are using your connection will impact other users on the network, you may see your speeds throttled.

Also consider a “soft” data cap. Once you’ve exceeded a certain amount of traffic, your ISP may slow your connection until the next billing cycle.

It’s also possible for ISPs to limit data speeds by type. So, for example, they might give you the full advertised speed when it comes to normal web browsing, but limit streaming or downloads. This practice is known as “shaping”. It’s generally better to look for an “unshaped” internet connection.

If the internet providers you’re considering don’t use the same network technology, you have to be aware of the inherent differences between the technologies on offer. The big choice these days is between a wireless 4G/5G fixed wireless and fiber internet.

Copper line DSL is quickly phasing out all around the world, so it’s less likely that it or older options such as dial-up internet will be on the menu. However, satellite internet is experiencing a revival as well, which means you should be aware of the implications each technology brings.

Wireless cellular options often come with longer latencies, can be sensitive to the weather and generally succumb to interference from various sources. Not to mention that the actual data might be more expensive at a given speed, especially in the case of 4G internet.

Fiber internet generally offers the lowest latency and the highest speed. It also tends to be the cheapest option. We’d recommend it as the first choice if it’s available to you at all. However, a new installation can be quite expensive and you may also have to buy a new router to take advantage of the speed over ethernet or WiFi.

Finally, on the horizon is satellite Internet from the likes of Elon Musk and his global internet system called Starlink consisting of thousands of satellites in low Earth orbit. Normally, satellite internet has been too expensive and has had very high latency, making it useless for consumer use. Now, if Starlink lives up to its claims, we could have global internet anywhere on the planet with low latency and an affordable price.

Perhaps the most important (and most difficult to assess) factor is after-sales service. Any ISP can promise you the moon. The real test is how well they treat you after you’ve signed on. The best place to look for information about the quality of their service is from third-party sources. Check out consumer sites where people can leave complaints about specific companies. Search for collective ratings and see what sorts of complaints people are making.

There are two important things to look out for when you compare new internet providers. The first is whether customers are getting the speeds and performance they’re paying for. The second is how much downtime people experience. If the service drops out frequently and takes a long time to come back online, it doesn’t matter how good it all looks on paper.

The Golden Rule: Don’t Tie Yourself Down

The world of ISPs is notoriously cut throat. These companies will offer anything to get you on board, and then either fail to live up to their promises or have service levels at something less than acceptable. So the most important principle when looking for a good deal from a provider is to avoid locking yourself into a long-term relationship.

You might pay a little more in the short term, but you preserve the option to move between ISPs whenever the deal or service sours. Getting out of a contract early can be costly, so don’t do it unless you are 100% certain it’s worth it!