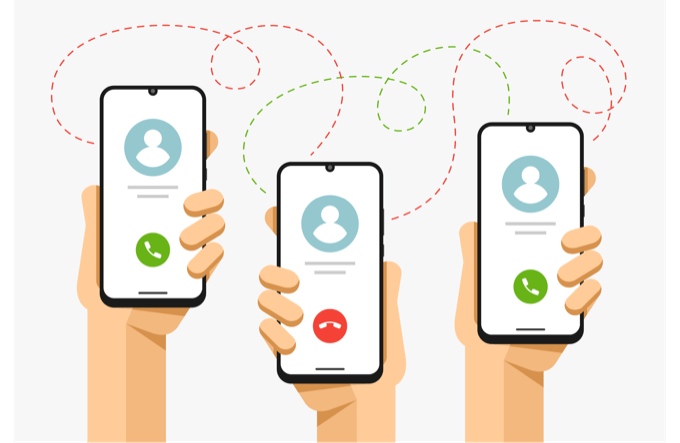 Keeping in touch with your loved ones shouldn’t have to be expensive, and if you look in the right places, it certainly won’t be. We’re of course talking about free calling apps that offer unlimited texts and calls. It’s not easy to run a service like this for free, which means it can be hard to find such an app, but we’ve listed the best options that really do offer calls and have carefully explained any potential cons like in-app ads or regional restrictions.

It’s important to distinguish the difference between apps that can make free external SMS texts and calls, and those that let you send messages to other users on their app.

Some apps will give you a free temporary number that you can call other numbers with, and they won’t need to install any apps themselves. These apps, with the exception of Google Voice, include in-app ads to help support their operating costs.

We would highly recommend you ask your contacts to install a chat app like WhatsApp or Viber to make calling and communicating effortless and free, but if you can’t do that, the following options may appeal to you.

If you’re in Canada or the US, this may be the best free calling app available. You are given a free number and can call, text, and receive the same from any number even if others don’t have the app installed. Coming from Google, you’re free from any frustrating ads that many other apps in this list do feature.

There’s also some other neat features, such as direct text transcriptions of your voicemails, so you can see what people have said instead of just hearing them. Whilst free calls are available to US numbers, you can also pay to make outgoing international calls.

The UI is clean, you can record your calls, and backup any important messages or calls. Google Voice isn’t available in countries outside of the US and Canada for now.

Dingtone offers free calls, texts, and a free number to go with it. Upon sign up, you’ll get 15 credits which can be used to call and text others within the first 48 hours of using the app. You can also claim a free phone number from a variety of regions.

After that, you can get more credits by completing mini games. It’s a fun way to reward users with more in-app activity. You’ll find more free credits by opening the app each day, watching ads, inviting friends, and completing offers.

You can also purchase credits, and there’s an option to remove ads for 1 month, which costs just $0.99, far cheaper than other alternatives in this list.

We highly recommend Dingtone as the best ad-supported free text app if you can’t use Google Voice. After this, apps start to get more intrusive with ads.

TextMeUp is another free SMS and calling app available for most regions. You can pick between multiple local numbers to organise your communications, for example one number for work and one for contacts you may have abroad.

Access may vary depending on your region, but you can often claim one free local number and purchase international numbers too.

To give you access to some free calls and texts, TextMeUp throws in a bunch of ads, some of which can be quite intrusive.

Thankfully you can choose to remove all ads and get a monthly/weekly package of call minutes. Some regions are more limited too, for example, in the UK you can only get 4 credits upon sign up and more credits must be purchased.

A Note on Text Me Inc apps: You may notice a large number of apps with similar names such as TextMeUp, TextMe, or FreeTone. These are all essentially the same app so duplicates have not been included in our list.

TextPlus is an app that allows you to make free texts and calls by implementing ads on the call screen, and pretty much anywhere else that they can fit them. You can also watch video ads or complete offers to earn credits. Finally, there’s an option to purchase credits, or subscribe, which will remove ads completely.

You can also get a free custom phone number, but the number may change if you don’t pay to secure it. Once you’ve got a number though, others will be able to call you. For the most part TextPlus works when you really need to make an important call or send a text, but the excessive ads are frustrating to deal with.

Free Calling Apps For Texts & Calls To Other Users

It’s time to look at the apps you can use to make free calls and texts to users that also have the app installed. These apps offer a far superior experience to the previously listed apps.

Owned by Facebook, WhatsApp is one of the most popular apps in the world for making calls and texts for free. It has built in end-to-end encryption to keep your messages private.

You can send photos, gifs, videos, and voice messages quickly to others, and all you need is a number in your contact list for WhatsApp to recognize them on the platform. This means that you can quickly add new contacts to chat to. Just make sure they also have the app installed.

You can send other users your location too, and if you are stuck without a phone, you can log into your account with the WhatsApp web app straight from your computer.

Viber is another text and calling app that comes with a variety of features to sync up your communication between devices. You can set up free backups so that all of your messages are always saved. You can log into a new device by simply scanning a QR code, and all of your past messages, saved photos, and shared videos will be sent to your new device too.

You can add other Viber users by importing them from your contact list, because Viber will use phone numbers as an identifier for users, similarly to Whatsapp. Viber also features video chat and group calling.

You can also buy credits to call other real numbers across the world, although if you already have somebody added to Viber you can do that for free.

Owned by Microsoft, Skype is a very popular app that’s often used on desktop, but the mobile version is filled with features too. Skype is popular for instant messaging and video calls, and it’s sometimes used for making group conference or business calls too.

Skype also has its own credit system for purchasing minutes to call real numbers across the world, so you don’t have to add somebody by their username.

You can also share videos, photos, and links with others, making it a great place to share memories or important details.

Built from the messages feature from within Facebook, Messenger brings dozens of great messaging features to your smartphone. With Messenger, you can message, call, and share to anybody you have added to your Facebook account. You can also add new people straight through Messenger now too.

Messenger features a variety of extra chat functionality you don’t really see elsewhere, including fun mini-games, polls, custom group colors and themes, rooms that support up to 50 people, and so much more.

If you don’t like how much of a memory hog Messenger can be, you can get a stripped back version called Messenger Lite, which comes with basic text and call functionality.

Should You Use a Free Calling App?

All of these apps offer free calls and texts, but the functionality differs between each app. It’s up to you to decide which app is most suited for you, but we’d recommend Viber, Whatsapp, and Skype first, then Google Voice, before considering the ad-supported alternatives like Dingtone and TextMeUp.