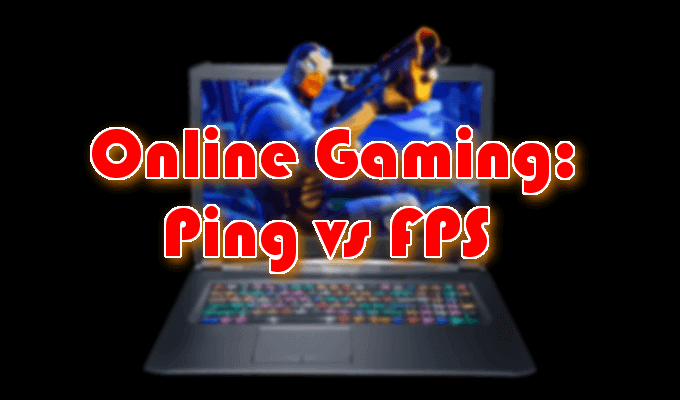 When it comes to online gaming, no excuse for the decline in gaming performance will be used as much as “It was lag”. The term is often reserved for when the game response time is too slow after entering in a keyboard command. It can sometimes also be uttered for other reasons such as not taking personal responsibility for a lack of skill or a drop in framerate.

The last two have absolutely nothing to do with lag. In fact, poor frame rates have everything to do with your computer and not complications with the network, namely high ping, which is what causes lag. Most gamers still have no understanding of the actual cause for the lag that they’re grumbling about.

This happens so often that even the definition has been altered to fit, calling a drop in frames as “local lag” and combining the occurences to simply mean “a noticeable decrease in application speed, due to extreme network congestion or insufficient processing power.”

Frames Per Second (FPS) vs Ping

I suppose with lag being a slang term, the definition is likely to change depending on the whims of the people who use it. However, to get into exactly what causes lag, we’ll first need to understand the differences between frames per second (FPS) and ping.

To help you identify and fix computer performance problems when they occur, you’ll have to understand the cause. We can begin by splitting up and discussing what fps and ping are and then applying what we’ve learned. This will help to discover why our online gaming sessions are having performance issues.

Low frames per second (FPS) is a computer problem, and therefore is not technically supposed to be considered lag. FPS is basically a measurement of how well your game is running on your computer. It indicates the number of new images that can be generated by your computer to create a smooth flowing image in game.

The higher the number of frames, the smoother the gameplay will be. When frames are low, the images can appear choppy, jerky, or seemingly stutter on screen. The maximum number of frames your computer can generate is determined by a couple of things.

Typically, the reason for low FPS is that more things are happening on screen than your computer can generate. This most often occurs while playing more advanced games on a computer in need of upgraded components. Just because your computer might check off all the boxes for a game’s minimum requirements, doesn’t mean that the game will run smoothly.

A noticeable drop in FPS is likely due to your computer trying to render more than it can handle. You can avoid this problem by upgrading one (or all) of the four mentioned components above. It can also help to make sure that nothing else is running in the background while gaming so that your computer’s processing resources aren’t being split.

Lag, in its true definition, is the result of a network problem. Namely, high latency, also referred to as “ping”, is the delay between information being sent and received. So when your network is talking to the game server, the length of time it takes for the server to “hear” what your computer is asking is factored into your ping.

The same also occurs when the game server answers your computer’s question. The time it takes to receive that answer is also factored into your ping. The complete result of both will provide you with a number meant to represent your ping. In game, your ping is measured in milliseconds so it may show up as ###ms (# being your total).

The higher the ping, the higher the chance of your game time incurring lag. Typically, if your computer is based far away from the game server’s location, your ping is likely to be high. An example of this is playing a new eastern mmorpg based in South Korea while you live on the east coast of the United States. You can expect a higher than normal ping.

Frames per second may still remain high while your game is experiencing heavy lag. When playing a multiplayer game, the game itself may appear smooth, with all images generated as they should be. However, during this time, players on screen may appear stuck, running in place, or seen to be teleporting around. This isn’t a “game hack” (though it’s not totally out of the realm of possibility), it’s lag.

Another indicator is attempting to land shots on someone in a first-person shooter game but you continually miss every time, even while at point blank range. This may be because your latency is so high that, by the time your shot reaches the opponent on your screen, they’ve actually already moved that character on theirs. Actions you’ve input will seemingly take longer to happen on your screen than they should.

Lag spikes are also an issue. These coincide with the teleporting around thing discussed earlier in a multiplayer game. Your latency may hit a rough patch causing the number to spike making it so that normal walking now appears as if player’s characters’ are pulling off a time jump.

There aren’t many things you can personally do to improve your lagging problem. A suggestion would be to switch servers, if applicable, to one that is closer in physical distance to where you’re currently located. Another would be to stick to using only an ethernet connection as opposed to WiFi. Slow internet can play a part in your lagging woes so increasing the speed of your connection could help.

Hopefully, you now understand that if you’re experiencing lag, it’s because of a network problem and not a computer one. Computer performance issues are a separate thing even though they may often times feel similar.

Low FPS and Lag Can Appear To Be Linked

To further complicate the notion that lag is computer performance-based, low FPS and lag can sometimes show up at the same time. This can occur when your game is experiencing both a network response time problem and an image generating issue.

An example would be in an online mmorpg, when entering a large city filled with other players running around, it’s very possible to experience both low frames and high ping simultaneously. The lag occurs because the server is struggling to keep up with all that’s going on at once, while your computer is struggling to generate all the visuals on screen resulting in the low FPS.

This may lead to confusion amongst gamers as in this particular case, both low FPS and lag have the same cause – more people than the game can handle in one place at the same time. This does not mean that they are now the same thing, just that the large number of players is what is causing both the dip in computer performance and network issues.

Why This Is Important

Understanding the difference between lag and low FPS can help you to identify problems and have a better chance at fixing them. Some games will allow you to display your current FPS and ping while playing. So, while suffering lag in game, you can check your FPS and ping counters to see what has changed. This will tip you off to the current problem and, if possible, allow you to fix it.

Things you can do based on your current level of ping vs FPS: